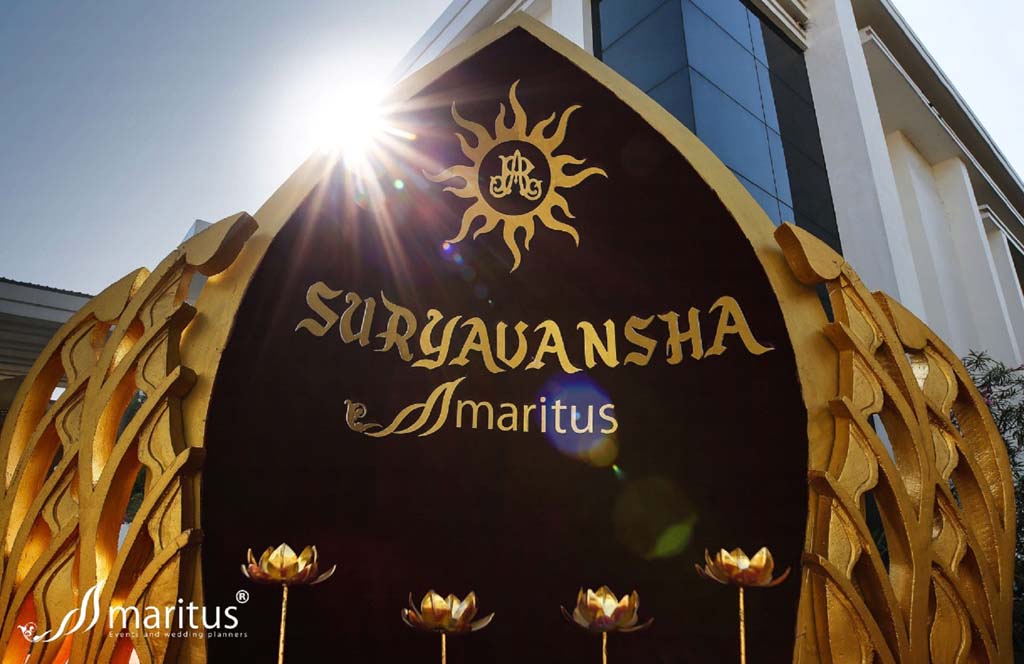 Suryavansha - The Best Royal Wedding that you will ever come across!

‘Marriage is like watching the colour of the leaves in the fall; ever changing and more stunningly beautiful with each passing day’. – Fawn Weaver

Wedding is not just an event; it is much more than that. It is celebrating love at its finest. Imagine a royal wedding, straight out of the history books with bold shades of gold and red. How majestic would that look! Fear not, for that was the brilliance brought out in the lovely union between Remya and Abin. Being doctors, they shared another common interest; the love for movies! This ultimately led them to incorporate the theme of ‘Suryavansha’ into their wedding, with the help of a phenomenal team from Maritus Events and Wedding Planners.

Maritus Events and Wedding Planners are the first exclusive wedding planners in Kerala with successfully executing over 1000s of marriages for more than 10 years! Under the able guidance of their leader - Shahid Bake, the team of wedding organisers spun a striking romantic tale between the sun and the flower Lotus, from nothing but the couple’s names. The name ‘Abin’ symbolized the life giving and ever radiant sun and the bride’s name ‘Remya’ denoted a tender and a beautifully bloomed lotus. Every dawn, the lotus yearns for the sun’s warmth to bloom and closes its tender petals at dusk with a hope to see the sun again the next morning. This beautiful concept was blended to the wedding theme along with carefully crafted customised décor. ‘Suryavansha’ literally stands for ‘descendants of the sun’ and is the name of the dynasty founded by the legendary king Ikshvaku. The dynasty also houses many epic romantic tales such as the one of Rama and Sita.

With extensive planning and research for over 6 months, every element in the wedding décor was created by skilled craftsmen from Andhra Pradesh Film city and it was put together by over 350 labourers. Materials were imported from various cities of India and the costumes were specifically hand-picked by the co-founder, Mr. Sijas Salim. A separate design team ensured that the décor could bring out a magical vibe that made everyone seem like they were being transported to a different magical realm!

The brain child of Mr. Shahid Bake finally took place in the wonderful venue of Al Saj Convention Centre at Thiruvananthapuram, which was attended by 1500 guests flown from over 50 countries. Carved gold pillars were kept along the pathway and imperial royal guards clad in golden armours welcomed the guests into the ‘kingdom’. Exotic flowers, rich fabric red-coloured drapes, grand lighting and floral rangolis added elegance to the overall aesthetic. The couple being the King and the Queen for the day, were dressed in royal imperial clothing. The groom pulled off a Royal Rajasthani groom look whereas the bride was dressed in an orange and green coloured Kanchipuram saree, handcrafted especially for her from the traditional silk weavers from Kanchipuram, Tamil Nadu. They looked like celestial beings, to say the least!

Even the entry of the couple to the venue was unique! Keeping up with the theme, the groom arrived in a vintage car where he was greeted by beautiful court women. They welcomed their king and proclaimed his arrival by blowing on a conch. Abin was escorted to the hall by a procession where the royal guards performed a captivating sword dance. The bride’s entry was no less than that! Remya was sat on a majestic gold throne designed to look like a lotus. Accompanied by dancing apsaras with lamps in their hands, the throne with sparkling fireworks, moved forward till it reached the stage. The whole process was elevated to an extraordinary level of magic when the guests also participated in welcoming the couple by ringing the given brass bells which was again specially brought from Bangalore. To say it was ethereal, will be an understatement!

Every event is incomplete without some entertainment. A spectacular dance performance was delivered by the renowned artist, Padma Shri Shobana. Her moves spilled of grace as she danced to a live orchestra by Mr. O K Gopi (another well-known artist in the Kerala film industry) and her beautifully executed natya just made the audience awestruck! Hats off to Maritus group for pulling off a flawless wedding and for bringing the magic alive.

This was a royal tale come into life. It felt so magnificent and seemed like everyone just slipped back into the striking historical period. May the love between Abin and Remya blossom for years to come just like how the epic historical tales of Suryavansha remains a romantic milestone! 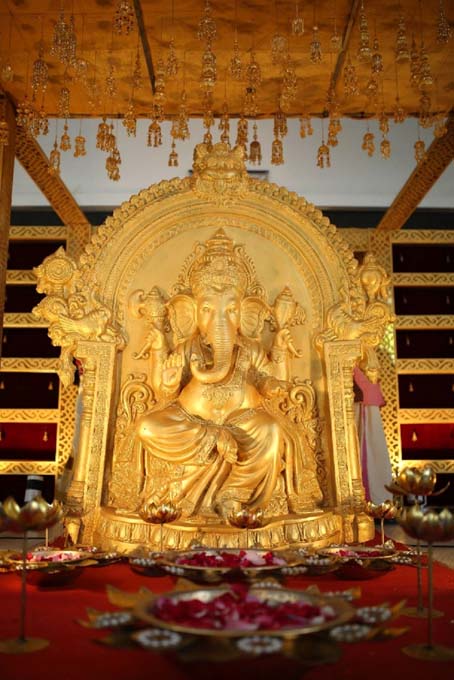 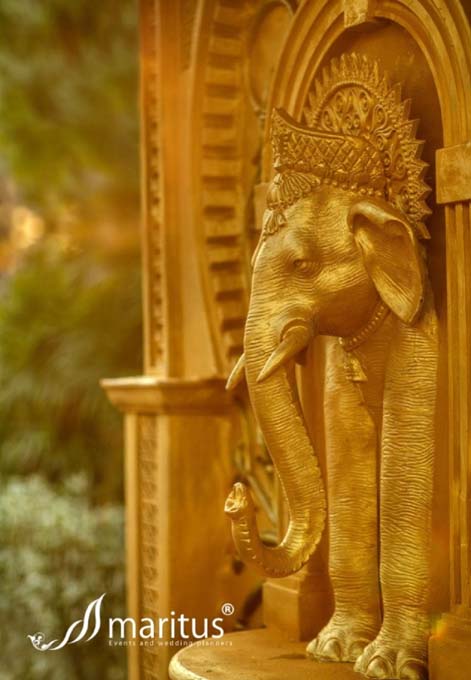 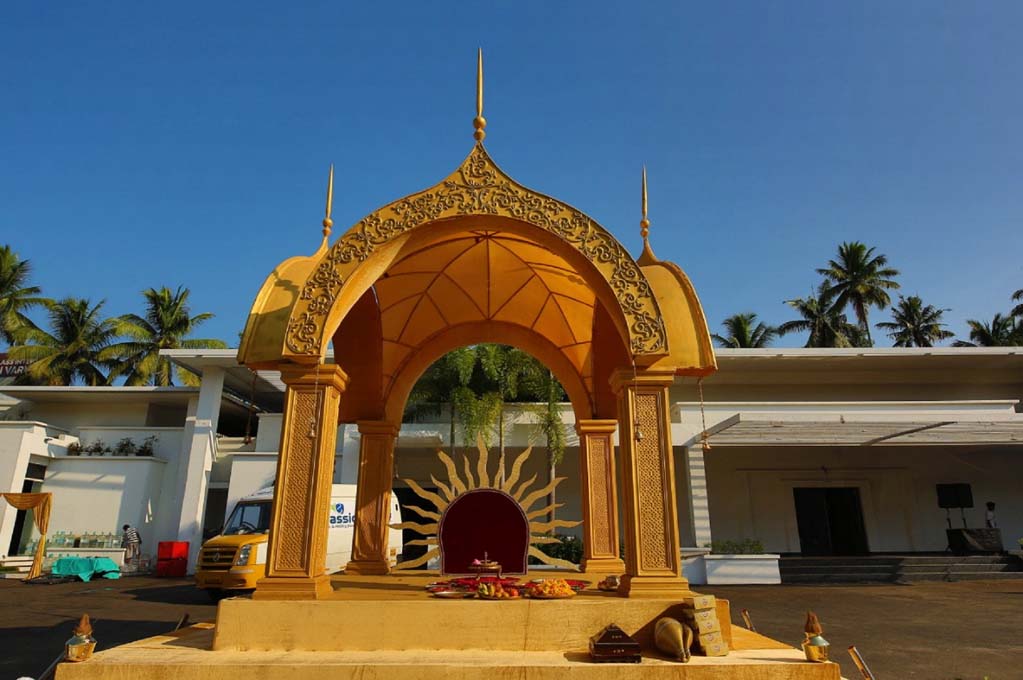 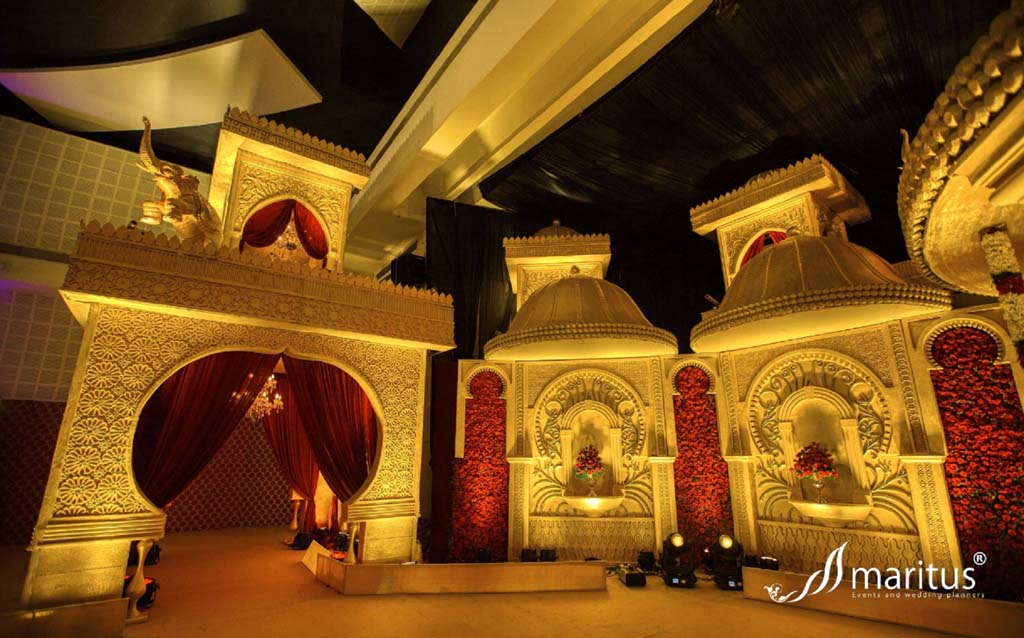 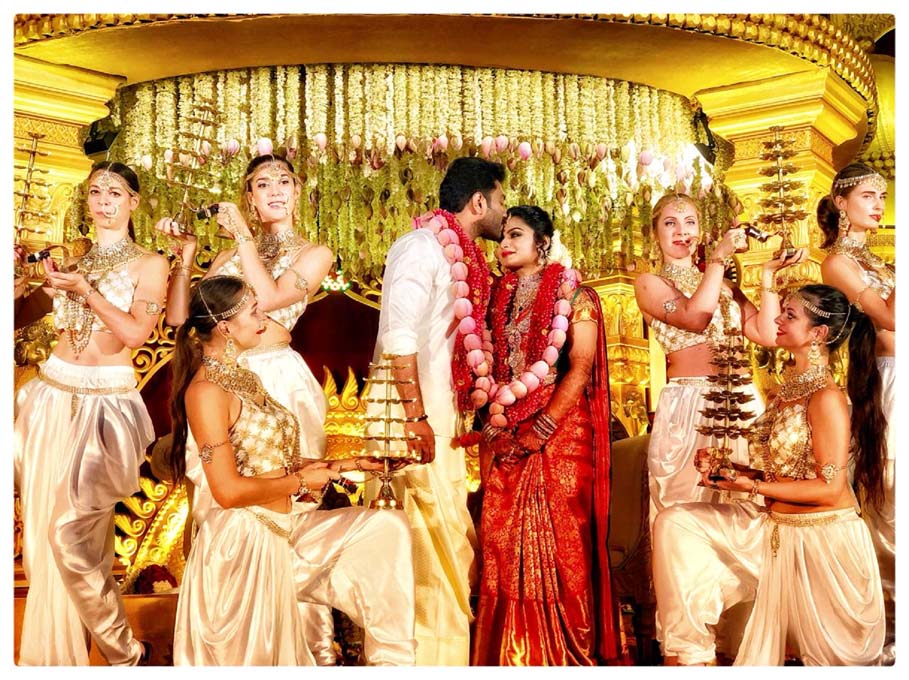 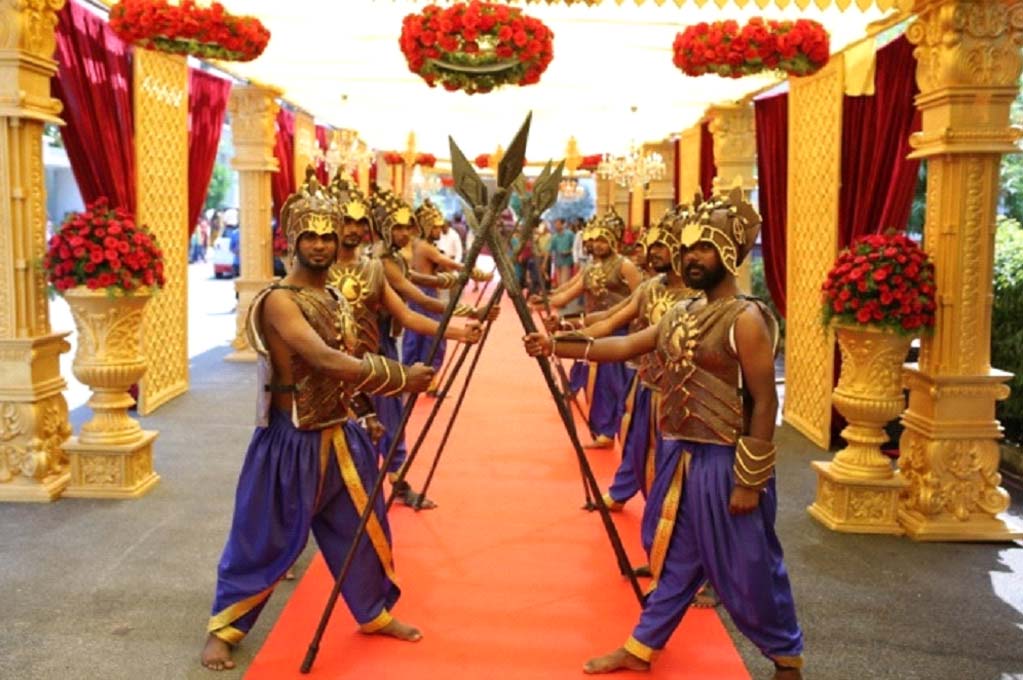 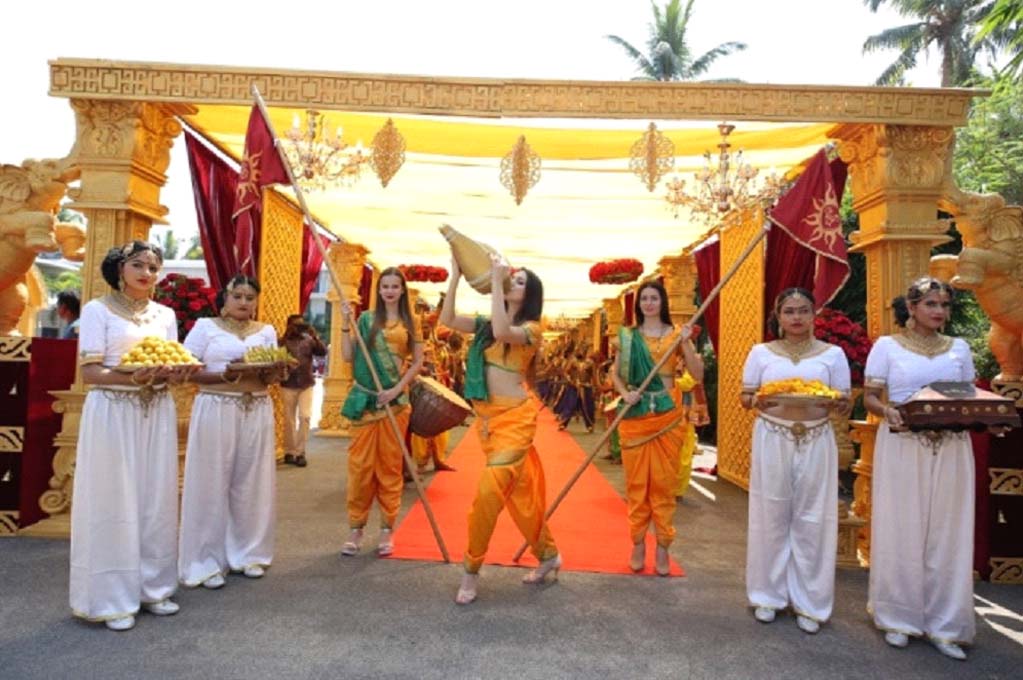 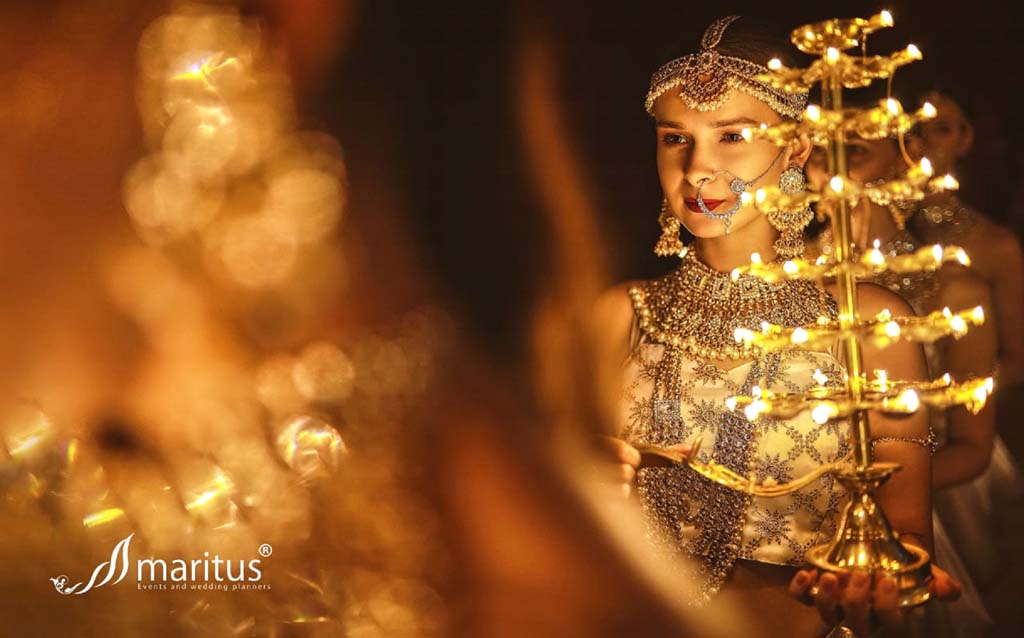 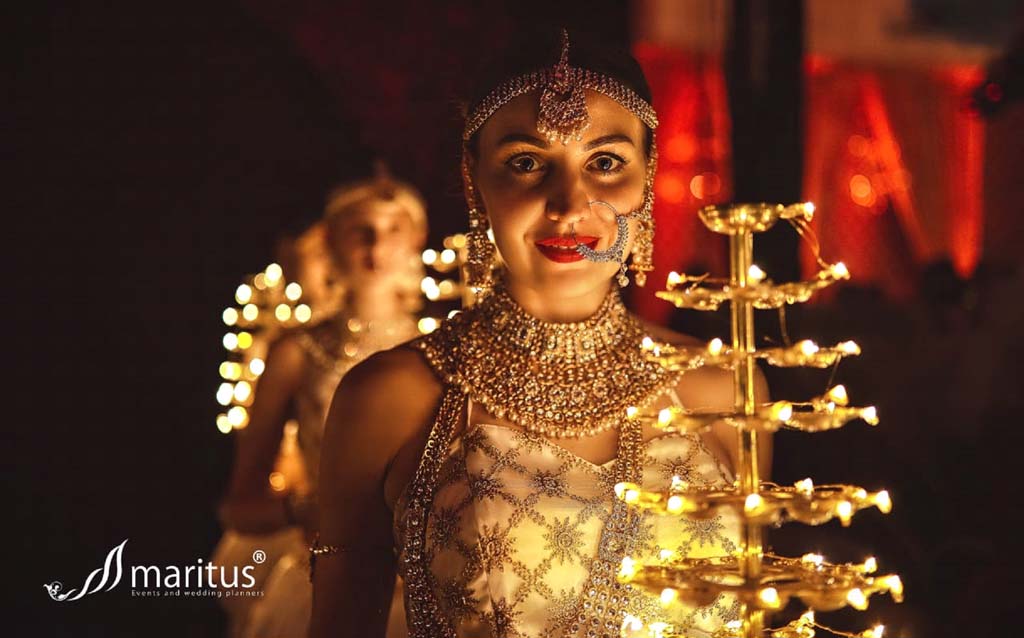 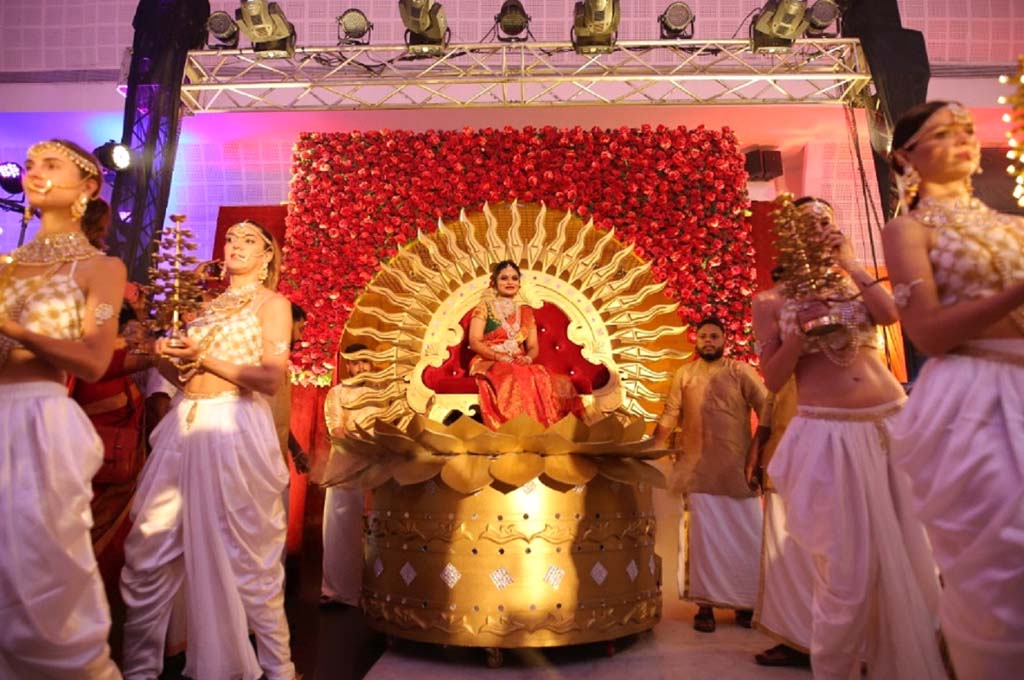 We at Maritus take pride in being the first and leading exclusive wedding planners in Kerala. We make dream weddings happen and take great care to provide the best services.

Get the complete wedding Planning app.